How to Hatch Chicken Eggs

We’re hatching chicks! The chickens have been a major focal feature for Low Nest over the last 12 months. With plenty of space we decided to get a couple more chickens, but instead of just buying point of lay 14 week old chickens we fancied a challenge; hatching and raising our own chicks!

This post is just a bit of a guide for anybody looking to follow suite and raise their own chickens from fertilised eggs.

What equipment is required to Hatch Chicken Eggs?

That’s it, you really don’t need much to get started. When they hatch and grow, then you need a lot more kit!

What is an egg incubator?

An incubator simulates the heat and humidity of a nesting hen. A broody hen will spend 21 days sitting and meticulously tending to it’s a cluster of eggs, not going out to eat or drink. The most basic set ups only maintain temperature and humidity. However spend a bit more and you can get incubators that will also turn the eggs. Turning the eggs, so they don’t grow un even in the egg is critical. A mothering hen will naturally turn all her eggs on a regular basis. If you have a basic incubator then you will have to turn the eggs 3 times a day (more on this below).

Some people do build their own. You can do this and you can buy some really cheap ones. However you pay for what you get. In the UK the most recommended brand is Brinsea, they’re not just market leaders but really the only choice.

The key things to look for is a thermometer and ideally a hygrometer as well as an egg turning function. However ours doesn’t turn the eggs as we like to do this, it just adds to the routine for us.

Where to buy Fertilised Chicken Eggs

Where do you buy fertilised chicken eggs? No, not the shops! Without going into biological details; a rooster has to be involved, and no egg farm has a rooster on site. The best thing you can do is ask a local farmer or chicken keeper. However; you can also buy online. The big risk of online ordering is damage caused during postage.

In the wild (or back garden), a Hen wouldn’t immediately sit on a cluster of eggs. Simply because it doesn’t produce 6 eggs at once. It will build up a collection over a couple of days. So it is quite natural for eggs to sit out in freezing cold temperatures for a couple of days, even weeks, before they are sat on to be hatched. When you get your eggs don’t rush to put them into the incubator. Let them rest at room temperature with the pointy end pointing downwards.

Step 1 – Set up and adding the eggs

Get your incubator set up 24 hours in advance. It will get up to temperature fairly quickly, however this time allows you to check it is at the right temperature. Different poultry and fowl require different temperature:

You’re looking to maintain a humidity of around 75%. This is done on most incubators with the addition of a water well. You can generally top the water up from the outside, so as to avoid too much interference.

Before adding the eggs, mark one side of them with an “X” and the other side with an “O”. Doing this allows you to track the rotations.

If you’re having to manually rotate the eggs then do so a minimum of 3 times a day and always an odd number. Doing it an odd number of times avoids the risk of one side being left facing the same way two night in a row.

After Day 7 or 8 you can start to “Candle” the egg. This basically means you put a light up to the base of the egg and allows you to check the development of the embryo. It’s also a very cool thing to do!

You can buy specific lights, I think some incubators even have them built in. However a torch and a toilet roll to hold the egg and direct light is just as good.

It’s now time to leave the eggs alone for the final push, no more turning.

Yay, the eggs have started to hatch! Just remember that in the wild hatching has a 75% success rate. In an incubator it can very easily be zero. So if it doesn’t work this time then try again!

But if you eggs have hatched. The head and beak will poke through first. The chick might then take 8 to 12 hours to rest an acclimatise to the fresh new world. After that it will break itself free and dry off in the warmth of the incubator. 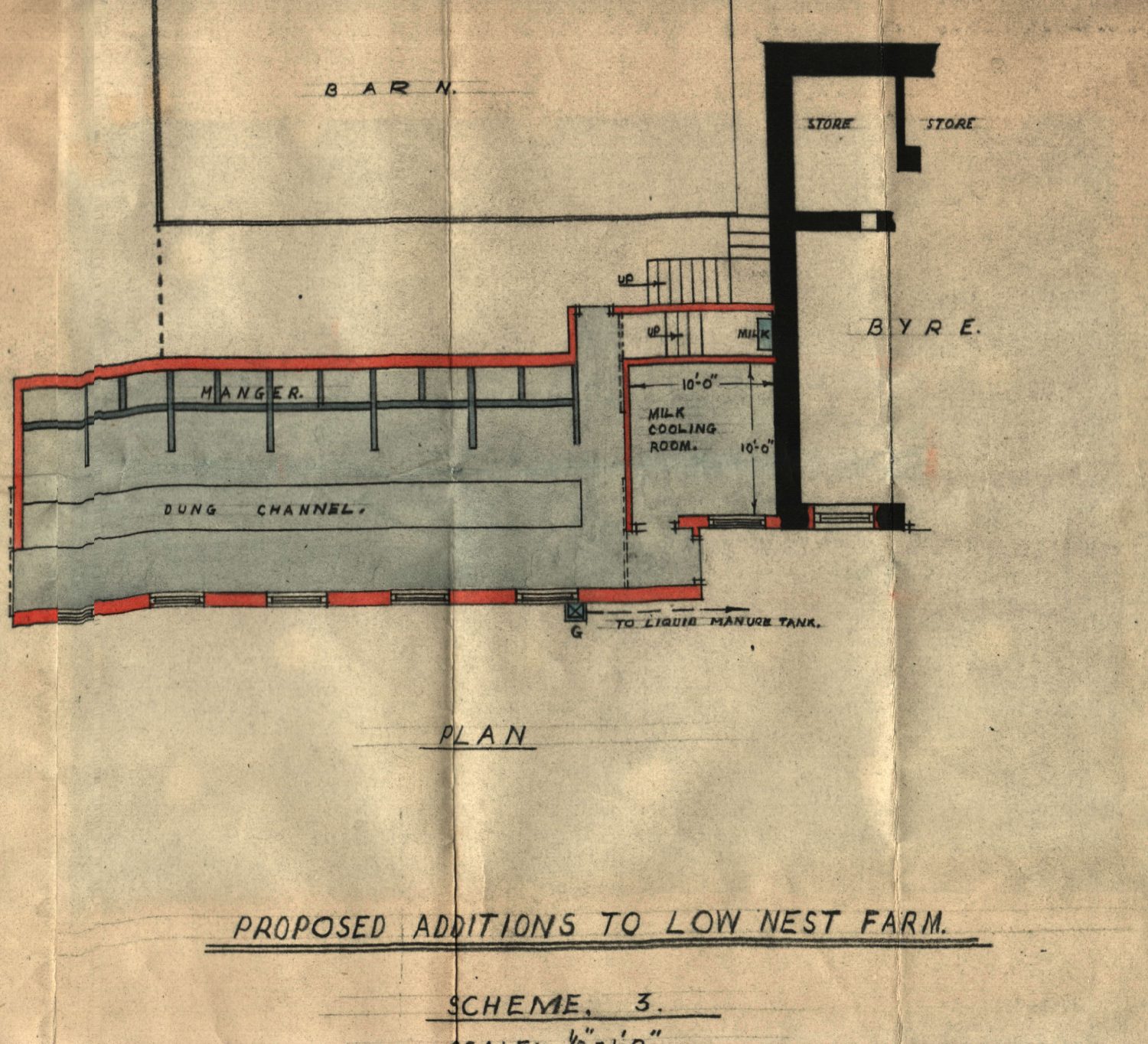 I’ve milked many a cow in those two studios.
Little known fact – should the need arise you could fit 2 cows side by side in the bathrooms with room between to get in to milk them.

It’s true. The old ‘Byre’ (posh name milking parlour) was divided in two to make the 2 studios. Each half was 3 stalls wide, each stall held 2 cows. Each bathroom is the same dimensions of one stall.

We love our chickens, particularly the fresh eggs. However as they produce 6 eggs a day, even when we’re at full capacity we never need that many. So we’re proud to announce the opening of the Low Nest Farm Honesty Box.

While romantic sounding all we did was build a basic foot wooden box out of pallets, put it on top of an old chair and secured it at the end of the drive with straps (to stop it blowing over the in the wind!). Rustic, but fitting!

At the minute we have just our eggs (4 for £1), but we hope to expand our range as the seasons go on!

So next time you come to stay (or you’re just passing); remember a Pound for your eggs!

If you visit an agricultural show, a shepherds meet or a stock auction you’ll rarely hear the word Sheep. Farmers have a wide terminology and vocabulary describing not just the gender, but age and purpose of the sheep.

Cull Yow – An old female yaw (ewe) that is too old for breeding.

Mule – A cross breed sheep. The most common mule is a Northern Mule. It’s a cross between a Bluefaced Leicester Tup and a Swaledale yow.

Pet Lamb – Also known as a bottling lamb. These are orphaned lambs that are raised by bottle feeding and often come out quite small because of it. Around lambing season you can find many a lamb in a farmers house being bottle fed.

Shearling – Also known as a Hogg. A lamb/young sheep that has finished weaning but has yet to have its first shearing. Generally 9 to 18 months, yet to cut its first two teeth.

Store – A weaned lamb that is often sold off for fattening.

Yow – Cumbrian/Northern/Scottish for Ewe. A female sheep, which has given birth.

Snuggled in the Northern Lake District fells we offer our own little Lakeland escape with 3 beautiful and spacious dog friendly studio apartments. Offering self catering accommodation and stunning views across one of the Lakes most majestic valleys